Interesting tool at http://www.falstad.com/ripple/   Below are different views of a two source in phase simulation.  The 3D select button allows rotation in 3D. Pretty cool, I thought. 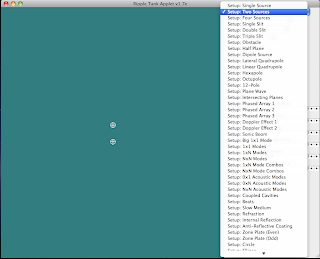 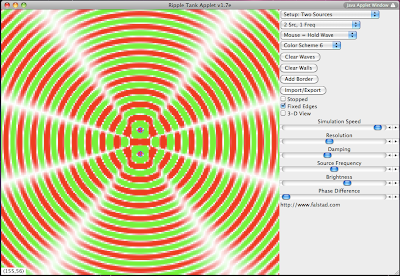 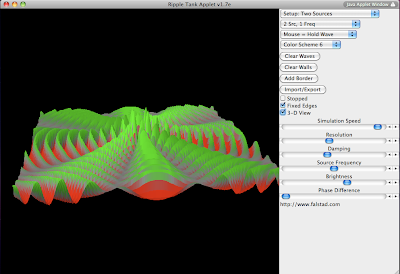 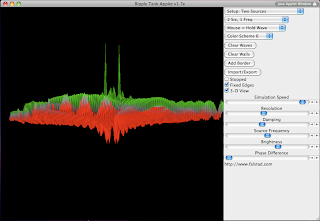 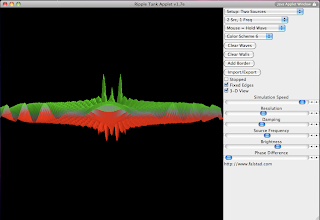 Got me thinking about a possible relation between nTubes and nShapes. "pattern creates nShape" seems precisely correct to me. It points to the question of the angle and distance of the observer. From a straight on view, from an appropriate distance the nShape is defined by this particular visualization tool. In that context the overall view is defined by the overall box that displays the interaction of waves and nemes.

Research note:  It would be good to have a tool that had more flexible  borders and the ability to show the wave patterns when there are speakers at the top, bottom and coming in from the right hand side. More clearly emulates the condition of living in an environment where information is coming from all sides. 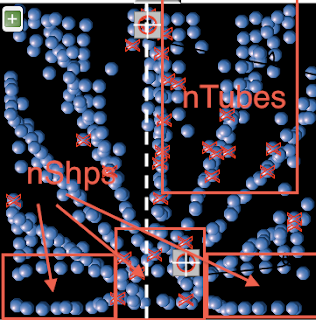 My conjecture is that at the level of interactions, it might be helpful to consider that when an nemiTube is well bounded it tends to form a nShape.

I'm seeing nShapes as loosely defined but bounded on all sides nemtubes. At the bottom of the picture above one can see a semipermeable boundary around the indication nShapes. At the top of the pic, one can call them nTubes as one end is open.

The implication is that nShapes have a space between the strings that removes friction from nEx. The less friction the greater ease of nEx. It points to the fact that if all the members of a group "speak the same language" nEx is radically increased. Increased nEx is associated with generation of power, and the space to Engage and Mull.


Whirlpools
Another issue Dibyendu brought up and building on a observation of Sean.   If one imagines Figure 1 rotating on the axis of the dotted white line, a whirlpool emerges.

Using Figure 2 as an emergent pattern  a different kind of whirlpool forms if rotated around the dotted line,  This time in the shape of a bowl. The notion of whirlpool to me is connected with the creation of pull.  Not sure where this is going yet, but seems to me Figure 2 might be a visualization for bottom up development.

Figure 2, is the same settings with a closed barrier between the bottom and top. The shape transition from Figure 1 only by inserting a closed barrier. At the moment of observation, there is no new energy coming into the the bottom half of the Figure. Interesting that disconnecting the energy still creates new patterns. 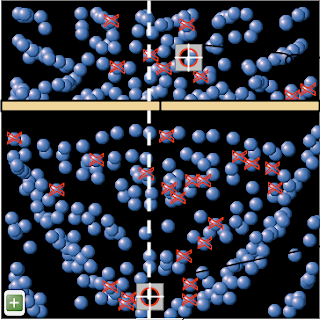 It seems to be a helpful tool to visualize some basic nemetic concepts. The first image below emulates free exchange within authentic constraints, or in nemetics code Free nEx w/in AuCnst .
The balls emulate nemes - the basic unit of interest in nemetics. The radiating lines are nStrings; the black spaces between the nStrings are nTubes. The overall pattern is the nShape. The waves and especially the wave interference patterns are nFields. 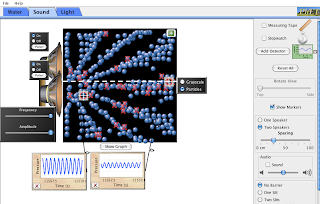 Another interpretation is the image above emulates a open classroom. Generating long nStrings into the world. The nemes are taken as students. The nStrings are taken as the energy in which the student is embedded. The dark spaces are nemiTubes that are bounded with Strings. Emulates peer learning. Although this pic doesn't show it, well bounded nTubes take out friction from neme Exchange nEx. Note the nTube proximate to the barrier is not well bounded as nStrings only create the border on the right. On the left we have a boundary that does not Exchange. 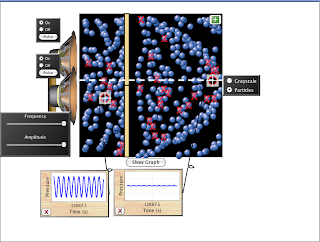 Thanks to Sean Grainger (see comments below. ) In the optimal visualization tool it would be possible to rotate the 2d image to 3d by spinning around the dotted line access.